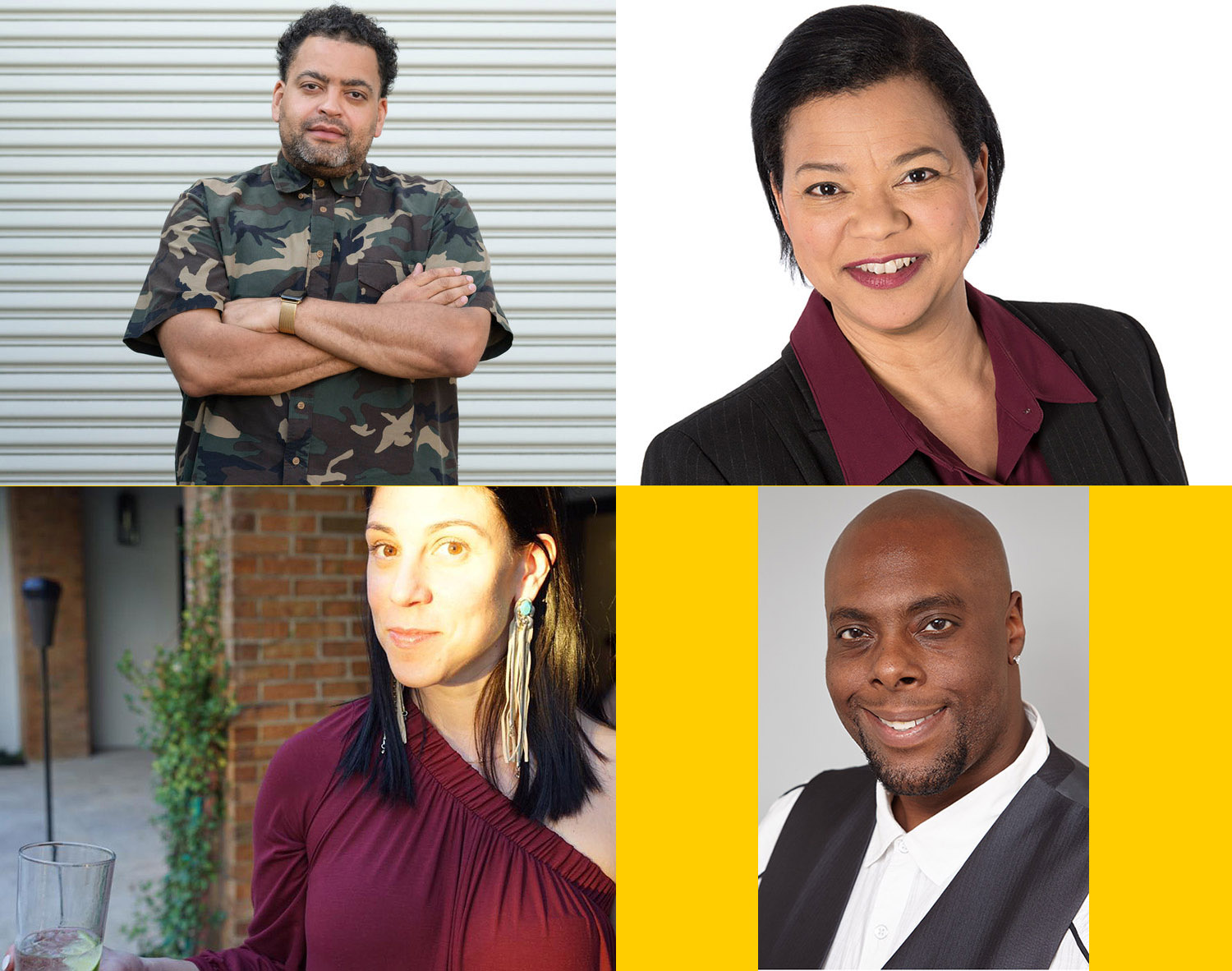 Join this panel of University of Iowa alumni working in media as they discuss the state of diversity in their industry, their experiences working in their industry as a person from an underrepresented or marginalized community, and how well—or whether—their UI education prepared them for their successful careers in these industries. The event will feature a Q&A period.

Ryan Ford (2000 BA Journalism and Mass Communication)—President, Chief Creative Officer, Cashmere Agency: As President and Chief Creative Officer, Ryan Ford oversees all creative and communication strategies at Cashmere Agency. Ryan builds out many of Cashmere’s most successful programs and campaigns, including Jack In The Box, Netflix, adidas, BMW, Disney, Google and much more. Constantly working to identify and integrate the changing dynamics between brands and multicultural millennial and Gen Z consumers, Ryan is a driving force behind the agency’s success. Ryan holds a BA in Journalism from University of Iowa and a MA in African-American Studies from University of California, Los Angeles. Prior to Cashmere Agency, Ryan served as Executive Editor at The Source, often dubbed “hip-hop’s bible.” For eight years, Ryan played a pivotal role in the construction and content of every issue and interviewed hundreds of revered musicians, executives, celebrities and politicians, including Jay Z, Kanye West, Dr. Dre, Ice Cube, Nas, and Outkast, to name a few. His tenure at The Source led him to several on-camera contributions for E! Network’s True Hollywood Story: Snoop Dogg and VH1’s Behind The Music. A music enthusiast, Ryan enjoys all genres of music, not just hip-hop. In his downtime, Ryan enjoys watching football (NCAA and NFL), playing video games (his favorite being Madden NFL), nerding out on anything related to Star Wars (specifically the Dark Side), and attending concerts. He hails from Des Moines.

Dana Roberson (1987 BA Journalism and Mass Communication)—Executive Producer, WNET PBS NewsHour Weekend: Dana Roberson plans and coordinates the production of news and current affairs program segment for PBS NewsHour Weekend, working closely with the editorial team at all stages of the production process from story development through post-production. Prior to joining PBS NewsHour Weekend, Dana served as producer and acting senior producer of WNYC’s The Takeaway, a national daily public radio program focused on the American conversation. Previously, she worked at CBS News for 18 years on acclaimed programs, including 60 Minutes and Sunday Morning with Charles Kuralt.  She also worked with legendary newsman Dan Rather on his investigative team at AXS-TV. Dana’s investigative reporting has earned her a Peabody Award for breaking coverage of the Abu Ghraib prison scandal in Iraq.  She has covered stories from the war in Afghanistan and the earthquake in Haiti to pill mills in Texas and Einstein’s pipe at the Smithsonian.

Isaiah Scales (2004 BA Journalism and Mass Communication)—Creative Services Manager, Walt Disney Television: Isaiah Scales is a Creative Services Manager for Walt Disney's Media and Entertainment Distribution, focused on marketing content creation for all Disney-owned television networks and Disney+. Isaiah started his career as an intern for the Fox Sports talk show The Best Damn Sports Show Period featuring fellow Hawkeye Tom Arnold. Isaiah remained a versatile player within Fox. Before transitioning into management, Isaiah was an Assistant Director for Fox live programming including American Idol, The Emmys and Teen Choice Awards among others, and spent 6 years as a Promo Producer, writing and producing promos for American Idol, 24, Glee and Gotham, among others. Isaiah is an Ottumwa, Iowa, native and currently lives in Los Angeles. Isaiah is also the President of the Los Angeles Iowa Alumni Club and plans alumni engagements, including Rose Bowl week and Iowa football and basketball game watches for its alumni. Outside of Hawkeye nation, Isaiah can be found traveling, attending concerts, and sporting events, and winning Super Bowls on Playstation.

Risa Tanania (2000 BA English; 2002 MA Art)—Co-founder, The House that Casting Built: Risa Tanania is the co-founder of The House that Casting Built, a proudly feminist, queer-owned, boutique casting company for large-scale, unscripted television and media training. Her most recent project, Dating Around, a series on Netflix, was praised by the New York Times and Vanity Fair for featuring more LGBTQ  daters, persons of color, and people over 70 in a series—something all too rarely seen. THTCB’s vision is to incorporate inclusion and representation for ALL watchers. Risa has cast for every network nationally, from HBO to PBS to Bravo and back again, all with diversity at its core. She received both her BA and Masters from the University of Iowa, with a focus in feminist intermedia studies, which brought her to where she is today—combining the power of pop culture and politics through the medium most watched in America, television. Additionally, she is on the Board of Directors at Congregation Beit Simchat Torah, the largest gay synagogue in the the world, and a member of the National Gay and Lesbian Chamber of Commerce. When she isn't trying to change the world through that guilty pleasure, she is likely at home in Manhattan with her wife, Anna, and two dogs, Artie and Barbra Streisand.

A College of Liberal Arts and Sciences Theme Year Event

Learn more about the 2020-21 CLAS Theme Year: Pursuing Racial Justice at the University of Iowa