Ornamentalist Magic and Apparitions of the Yellow Woman 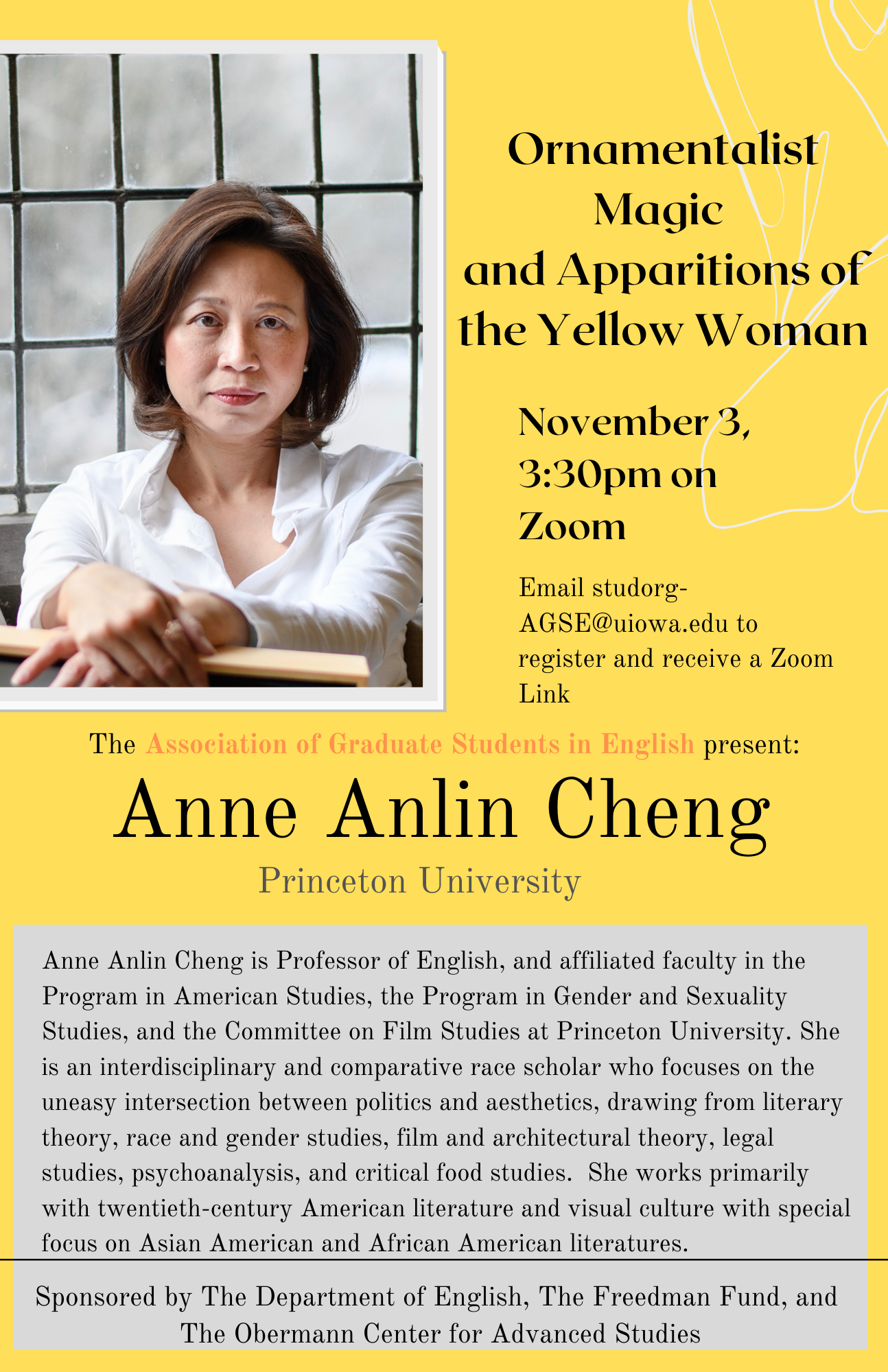 Anne Anlin Cheng is Professor of English, and affiliated faculty in the Program in American Studies, the Program in Gender and Sexuality Studies, and the Committee on Film Studies at Princeton University. She is an interdisciplinary and comparative race scholar who focuses on the uneasy intersection between politics and aesthetics, drawing from literary theory, race and gender studies, film and architectural theory, legal studies, psychoanalysis, and critical food studies.  She works primarily with twentieth-century American literature and visual culture with special focus on Asian American and African American literatures. Professor Cheng is also the founder and organizer of the public conversation series Critical Encounters that promotes dialogue between art and theory and encourages cross-disciplinary conversations on topics of social justice .Her work has appeared in journals such as Critical Inquiry, Representations, PMLA, Camera Obscura, Differences, among others.  She is also a contributor to New York Times, The Atlantic, Los Angeles Review of Books, and Huffington Post

Professor Cheng is the author of The Melancholy of Race: Psychoanalysis, Assimilation, and Hidden Grief); Second Skin: Josephine Baker and the Modern Surface; and, most recently, Ornamentalism (which will provide the foundation for this talk). Focusing on the cultural and philosophic conflation between the "oriental" and the "ornamental," Ornamentalism offers an original and sustained theory about Asiatic femininity in western culture. This study pushes our vocabulary about the woman of color past the usual platitudes about objectification and past the critique of Orientalism in order to formulate a fresher and sharper understanding of the representation, circulation, and ontology of Asiatic femininity. This book alters the foundational terms of racialized femininity by allowing us to conceptualize race and gender without being solely beholden to flesh or skin. Tracing a direct link between the making of Asiatic femininity and a technological history of synthetic personhood in the West from the nineteenth to the twenty-first century, Ornamentalism demonstrates how the construction of modern personhood in the multiple realms of law, culture, and art has been surprisingly indebted to this very marginal figure and places Asian femininity at the center of an entire epistemology of race. Drawing from and speaking to the multiple fields of feminism, critical race theory, visual culture, performance studies, legal studies, Modernism, Orientalism, Object Studies and New Materialism, Ornamentalism will leave readers with a greater understanding of what it is to exist as a "person-thing" within the contradictions of American culture (Oxford University Press).

Professor Cheng's talk will be followed by a lively discussion. We hope that you will join us for a night of discourse over [digital] dinner.

This event is presented by the Association of Graduate Students in English, and was made possible by generous financial support from The Department of English, The Freedman Fund, and The Obermann Center for Advanced Studies.