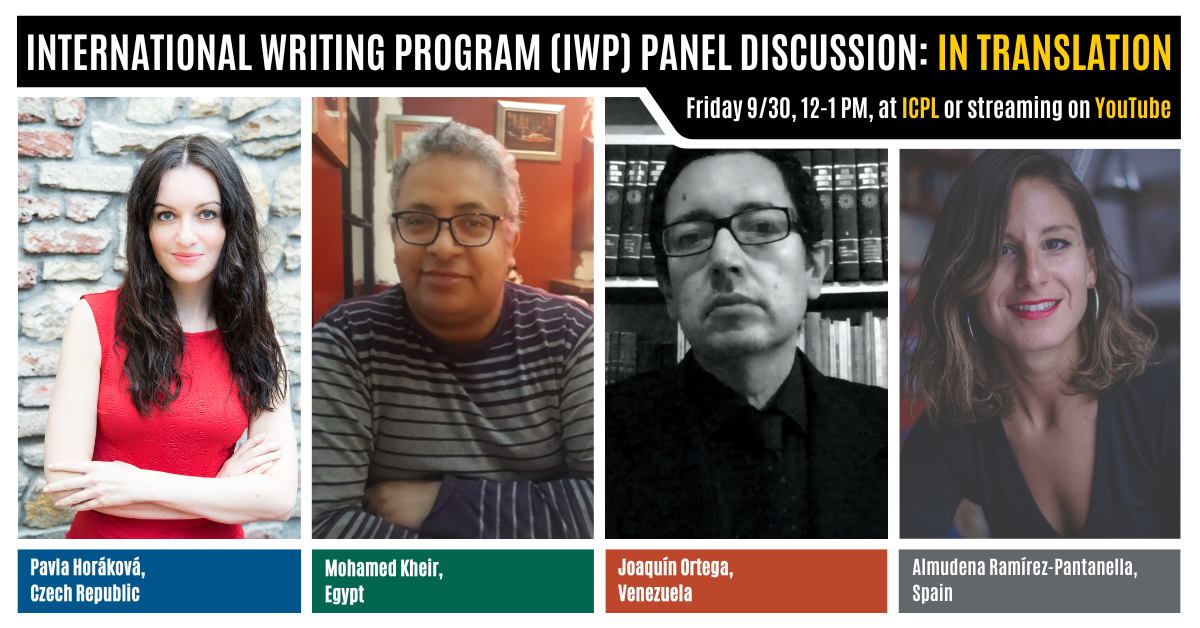 A conversation between four IWP 2022 Fall Residency writers on the theme of "In Translation."

Join us in Meeting Room A of the Iowa City Public Library, or watch live online via the ICPL YouTube channel: https://www.youtube.com/user/thelibrarychannel

Pavla Horáková (novelist, nonfiction writer, journalist, translator; Czech Republic) is the author of five novels, including a children’s trilogy, and two nonfiction titles. Her widely translated Teorie podivnosti [A Theory of Strangeness] won the 2019 Magnesia Litera Award for best work of Czech fiction; Srdce Evropy [The Heart of Europe] was in a national critics’ poll voted among the best books of 2021. A recipient of two awards for her literary translations, she also has a long career in radio journalism. Her participation is possible thanks to a grant from the Bureau of Educational and Cultural Affairs at the US Department of State.

Joaquín Ortega (playwright, essayist, poet, scholar; Venezuela) works across media and institutions. The author of a volume of poetry and of plays like Lo escuche llorar en mi boca. Tríptico de Caracas [I Heard Him Cry in My Mouth. A Caracas Triptych], he has long been a librettist for popular radio and TV comedy shows, and has also published La cultura del milenio: ensayos sobre creatividad [The Millennium Culture: Essays on Creativity]. He teaches at Universidad Central de Venezuela, in the School of Political and Administration Studies. His residency is made possible by the Bureau of Educational and Cultural Affairs at the U.S. Department of State.

Mohamed Kheir (fiction writer, poet, journalist, editor, lyricist; Egypt) won the Egyptian Ministry of Culture Award for his first poetry collection, Leil Khargi (2002); both his story collections Afarit Al Radio (2011) and Remsh Al Ein (2016) received The Sawiris Cultural Award. In 2021, the second of his three novels was published as Slipping by Two Lines Press. Alongside his literary work and a career in journalism, Kheir also writes lyrics for young singers from Egypt and Lebanon. He participates courtesy of the Bureau of Cultural and Educational Affairs at the U.S. Department of State.

Almudena Ramírez-Pantanella (playwright, screenwriter, director; Spain) has had plays produced in Spain, Latin America, and the UK, and new work commissioned by theatres in the UK, France, and Italy. Los amos del mundo [Masters of the Universe] won her Spain’s Premio Calderón de la Barca for new playwrights. She has screen credits for La casa de papel/ Money Heist (Netflix) and has written for other film and TV productions. A PhD student at Madrid’s Universidad Complutense, she also teaches creative writing. Her participation is courtesy a gift from the estate of W.B. Quarton and the Embassy of Spain in Washington D.C.