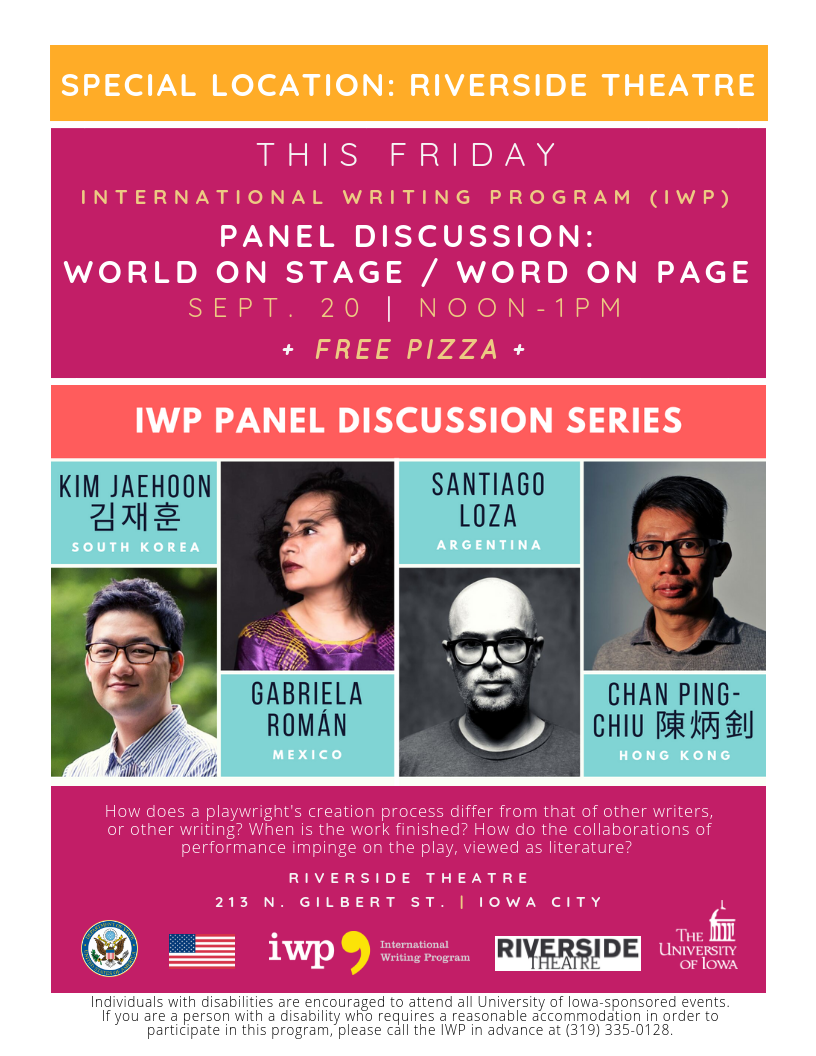 Please join us at a special location for this event in our panel series: Riverside Theatre

How does a playwright's creation process differ from that of other writers, or other writing? When is the work finished? How do the collaborations of performance impinge on the play, viewed as literature?

KIM Jaehoon (drama; South Korea), the president and artistic director of the theater company TOC, received his BA from the Theater Arts Department at the University of Iowa. His plays [To Heaven; Our Mental Hospital; Again] have been influenced by the Theater of the Absurd. A translator and lecturer, Kim Jaehoon participates in the IWP Fall Residency courtesy of Arts Council Korea.

Gabriela ROMÁN (poetry, fiction, translation, drama; Mexico) is a playwright, stage director, and actor, whose plays have been staged throughout Mexico. In 2018, Román won the Theater Exhibition of Morelos State and was a finalist for the National Young Drama Prize for her play Iridescentes; Cósmica was a finalist for the 2015 ASSITEJ-Spain Theatre for Young Audiences International Prize. Her work has been translated into English and Portuguese, and anthologized. Román participates courtesy of the William B. Quarton Foundation.

CHAN Ping-chiu (drama; Hong Kong) is the founder the experimental theater group Sand & Bricks for young artists, the artistic director of the On & On Theatre Workshop, an educator, and a widely awarded veteran stage director and playwright. In 2013, he was selected by the Hong Kong Arts Development Council as the Year’s Best Artist (Drama). He participates courtesy of the Robert H. N. Ho Family Foundation.

Santiago LOZA (drama, fiction; Argentina) is author of over 20 plays, collected in three volumes, and of two novels. His first feature, Extraño [Stranger], won Best Picture at the 2003 Rotterdam Film Festival, and was followed by seven features and  documentaries; most recently, Breve historia del planeta verde [A Brief Story from the Green Planet] got the Teddy Award at the 2019 Berlin Film Festival. Loza participates courtesy of the Bureau of Educational and Cultural Affairs and the US Department of State.