Bodies, Motion, Spaces and Species: An Active Approach to Histories of the Horse and Humans 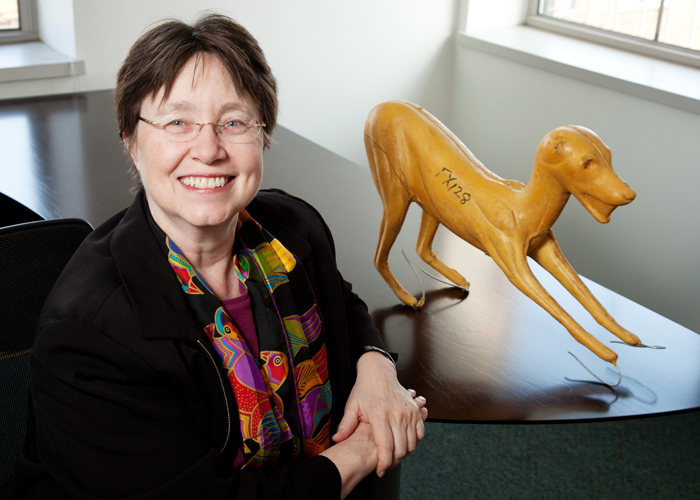 In the past, the embodied lives of horses and people were deeply intertwined on a daily basis. But what did that feel like?  Using vision, motion and our kinesthetic senses, can we activate our historical imaginations to better grasp what Iowa life was like when horses and humans depended upon one another? This interactive gallery talk with guest speaker Dr. Jane Desmond will explore the power of kinetic and tactile experience as a mode of historical knowledge and invites guests to take an active approach to engaging history, especially within the current Main Library Gallery exhibit, The Pull of Horses on Local and National Histories and Identities. Guests will be encouraged to move around the exhibit during the talk. After the program, join Dr. Desmond and the exhibit's curators, Dr. Kim Marra and Mark Anderson, for a light reception.

Please RSVP here for this event.

Dr. Jane Desmond is a Professor in Anthropology and Gender and Women's Studies, and Executive Director of the International Forum for U.S. Studies: a Center for the Transnational Study of the United States, at the University of Illinois at Urbana-Champaign, where she also holds faculty appointments in the Department of Dance, the Unit for Critical Theory and Interpretation, and the College of Veterinary Medicine. In 2019-2020 she was selected as a Public Voices Fellow of the Op Ed Project, which promotes public engagement by academic writers.

Her primary areas of interest focus on issues of embodiment, display, and social identity, and cultural conceptions of the natural world. Her areas of expertise include performance studies, critical theory, visual culture, the analysis of the U.S. in global perspectives, and the political economy of human/animal relations. She is the Past President of the International American Studies Association, the Founding Resident Director of the international Summer Institute in Animal Studies at UIUC, and the founding editor of the Animal Lives Book Series at the University of Chicago Press. In addition to her academic publications, Desmond had a previous career as a modern dancer and choreographer, and has worked in film and video. She has written about human-animal relations for a number of public venues such as CNN, The Washington Post, The Huffington Post, and Newsweek, and once even co-designed an award-winning billboard. The author or editor of five scholarly books, she holds a Ph.D. in American Studies from Yale, and most recently published Displaying Death:  Animating Life:  Human-Animal Relations in Art, Science, and Everyday Life (University of Chicago Press, 2016), which NPR called a "gripping...important and moving book." Her current book project is tentatively titled: Medicine Across the Species Line: Cultural Dimensions of Veterinary Medicine, based on several years of fieldwork in veterinary clinics. She is delighted to return to the University of Iowa, where she served on the American Studies and Women's Studies faculty from 1993-2006.